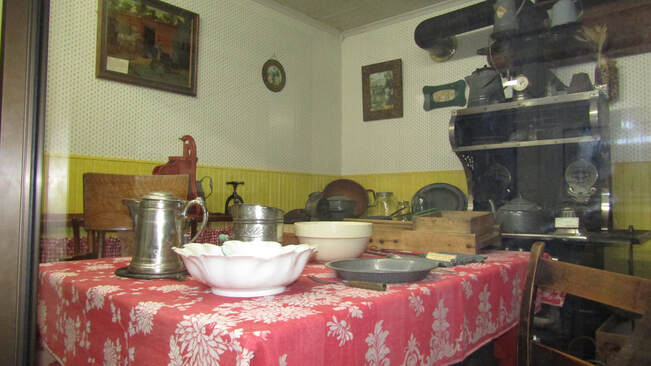 "Granny's Kitchen" Photo by Daisy E. Albright
The opportunity and need to create a museum compelled the Tillamook County Pioneer Association to open the Tillamook County Pioneer Museum in 1935. The collection began with 400 items displayed for the public in a single room at the second county courthouse which had closed after being replaced by a third structure on Laurel Street between First and Third Streets.

The Tillamook County Pioneer Association and their volunteers operated the museum until 1945. For the first ten years, the museum emphasized local 19th century history, as they actively sought out artifacts to suit specific exhibits the association wanted to construct.

In 1945, the Pioneer Association stepped back from the museum and Tillamook County took over the museum's operation and hired a curator. For the next forty years the county ran the facility and provided funding and financial management for the museum.

However, in July 1, 1985, the county decided to sever its relationship with the Museum and end its funding. In response to the county's decision, the Tillamook County Pioneer Association and other concerned citizens came together to find a way to keep the museum open and flourishing. Although the county no longer wanted to manage and finance the museum, it was willing to allow a new museum group to continue using the second courthouse for a nominal fee. With the county's willingness to rent the courthouse, the museum's champions crafted a levy proposal put to voters to fund the museum.

In May 1996, voters again signaled their support by voting to establish a County Historical Fund with $.08 per thousand true cash value of permanent funding for the museum. The 1996 measure passed by a 2 to 1 margin. It was not tied to any particular location in the county but is tied instead to the non-profit museum organization. The history of the Tillamook County Pioneer Museum reveals the significance of the organization and collection to the community. In 1935, and again in 1985 and 1996, the people of the county rallied behind the museum and signaled their support in the strongest manner possible. This is the essence of true - although the term is overused - grass-roots activism and support.

Since 2009, the County Commissioners and the members of the County's budget committee have financed a lesser portion of the Museum's operating budget and the amounts granted have decreased substantially over the years. This has prompted the Museum Board and Executive Director to research other ways of funding for the Museum, including turning to the Community once again for a permanent tax levy that would not be controlled by the County.

​Today, the Pioneer Museum has 19 exhibit areas, including a Main and Northwest Gallery where exhibits are rotated. There are over 50,000 artifacts in the Museum's collection along with over 2 0,000 photographs and newspaper ephemera.